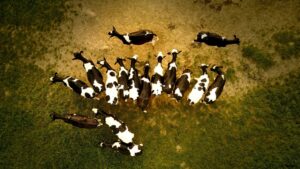 Which are the best cow breeds for milk? What are the unique characteristics that make them the more preferred breeds? Cow breeds are numerous, and it can get a bit complicated when it comes to the selection of the right breed for your farm. Most farmers need to establish that contents of the milk, such as milk fat, are of the best quality. If you are trying to start a small or large dairy operation, you need to be very familiar with the dairy cattle that will be suitable for your needs, so that you do not end up having a business that does not make progress.

What to expect from the agriculture sector in this decade.

The most preferred cow breeds for milk

Topping the list of the best cow breeds for milk is the Holstein or the Holstein-Friesians as they are popularly known. These were brought to the USA back in the 1850s, and they ended up becoming a favorite amongst farmers. 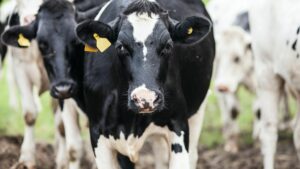 Holsteins mostly have black and white coloring, but there are also some red and white ones as well. Th have a sweet temperament, are quite gentle, and happen to possess a strong herd instinct. They weigh an estimated 1500 pounds and stand close to 5 feet tall when fully mature.

One of the things that makes it a favorite breed in the USA is that its milk is the lowest in milk fat, and it produces quite a plentiful amount of it. An average Holstein cow can give you an estimated 17,400 pounds of milk on an annual basis.

Jerseys are mainly reared as the family milk cows. Named after their place of origin (French Isle of Jersey), this breed happens to be way smaller than the other breeds, with a height of about 4 feet. The fully mature Jersey cow weighs about 1200 pounds at most. This breed is also known for being sweet but curious.

Jerseys have the capability to convert grass to milk better than the Holsteins do, though their milk has higher butterfat content. It is actually the breed with the highest butterfat and protein content. if well-fed, one cow can produce about 6 gallons of milk in a day.

Some dairy farmers chose to work with Jerseys over Holsteins because the Jerseys produce longer in life than their counterparts.

This is one of the larger breeds of dairy cows. They weigh about 1000 to 1300 pounds upon maturity. Evidently, their yield falls right between Holsteins and Jerseys in milk production. When in the fields or cattle shed, you can recognize the Ayrshire by the white and brown markings. There are also some Ayrshires that are all-white. The purebred cows are only red and white. This breed’s country of origin is Scotland, from where it was produced by crossing several breeds, including the Holstein. 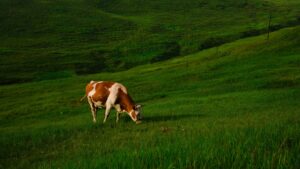 Generally, this breed is quite vigorous and hardy, and its calves happen to be quite strong. The average mature Ayrshire will produce roughly 17,000 pounds of milk per year.

This breed originated from Switzerland and is perceived as one of the large cow breeds. The one outstanding thing about the Brown Swiss is that they are generally slow to mature. Upon maturity, however, they can weigh about 1500 pounds. This breed produces milk that is rich in butterfat. It is therefore a highly preferred breed when the production of cheese is involved. The breed was introduced to the USA in the late 1800s and has been perceived as a suitable cow by farmers who prefer cows that can do well in several different climates. It is also quick to adapt to different types of farms.

Guernsey is the close but taller relative of the Jersey breed. These cows originated from Germany and were introduced to the USA in the early 1900s. These cows became quite popular within a short time due to their creamy golden milk.

The breed was however not well-built to thrive in the commercial dairy business setting, hence it is one of the rare dairy breeds in the USA. Farmers who rear the Guernsey cows have to hand milk them. this means that they are a perfect fit for the small family farms.

This breed can, however, produce up to 14,000 pounds of milk per year. The milk has a high concentration of butterfat, beta carotene, and protein content. The good thing about this breed is it usually consumes less food per pound of milk, in comparison with the larger breeds. This is actually a thing that is making this breed gain popularity in the present-day world, as the demand for sustainable sources of food increases.

Is there a defined way to thrive as other investors in the agriculture sector sink under the weight of market forces?

This is a breed that was more popular in the mid-1800s and in the early 1900s. They were introduced to the USA as exhibits by PT Barnum. Currently, the breed has about 200 registered entries in the American Livestock Breeds Conservancy books. The breed, which is often described as docile, happens to be light-boned, and it easily calves.

The farmers who rear this breed prefer it for its longevity and for the high meat yield. This means one can rear them for milk then sell them off to be consumed as beef.

This is a popular Irish breed that made its way into the USA and became quite popular. Farmers who prefer breeds that can be milked and used for meat are the ones who have been running after the Dexter breed. They produce about one to three gallons of milk per day, hence can satisfy a sizeable family.

This breed is small in size and does not need to be fed intensively to sustain the production of milk. Farmers who have a small portion of grazing land can rear this breed without worrying about having to restore the growth of grass before the Dexter cow feeds on all of it.

Dairy farming is to thank for the continued supply of dairy products in the market. Even with the dairy farmers doing all takes to sustain the consumers, we are bound to face a severe food shortage. How will farmers survive and profit? Here is what agricultural investment experts think should be the way out:

There you have it: The best cow breeds for milk in the whole of the USA! If you are thinking about starting a dairy farming project, then you know which breeds will be suitable for your situation. If you are still open to exploring other profitable agriculture options, then you can have a look at the recommended resource above to get insights from the investment experts. Do not forget to share the article with a fellow investor or farmer 😉