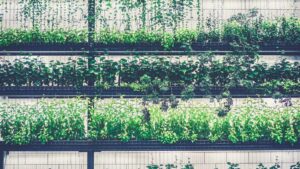 What are the challenges facing vertical farming? As the world continually faces challenges that are associated with the rapid growth of population, the gradual change of climate, as well as the decrease in the land that is available for arable farming, human beings are being necessitated to come up with new ways that will see to it that enough food is produced. One of the main solutions that has emerged is vertical farming. Its use in many nations all over the world proves that there are underlying benefits to it, that are relevant in the provision of solutions to the above-stated challenges.

Getting ready for the food security challenges – From an investor’s perspective!

Vertical farms usually have unique structures, in which shelves are stacked vertically, in a bid to see to it that the volume of the space set aside is totally filled, and maximum produce obtained from a limited piece of land. Farmers who own vertical farms can grow up to 5 to 10 times the number of plants in comparison to those that are grown in fields of the same size. From a theoretical point of view, the number of crops that can be grown in a vertical farm is mostly limited by the height of the building.

Even with its very lucrative benefits, vertical farming still presents a couple of challenges to those who try to dive into it. Some of the main ones include:

The very first climate management challenge which those wishing to try out vertical farming must solve is to determine how they will cool, heat, and dehumidify the internal environment. Most vertical farms (VFs) are bound to have an excess supply of heat from the sources of light, the motors that operate the fans, as well as the pumps and other automation equipment. VFs are usually insulated to ensure that they can be operated both day and night, and at any time of the year.

Dehumidification happens to be a constant requirement in these farms, owing to the consistent amount of moisture being released through evapotranspiration (Et) by the crops and the moisture that escapes from the irrigation systems. The rate of dehumidification is usually dependent on both the minimum and maximum rates of evapotranspiration that are expected inside the vertical farm.

Heating systems are not a major requirement in vertical farms, since there is already some heat that is being generated by the equipment in the VF. During the air conditioning process (Done by the dehumidifier ), however, it is possible for very cold air to be delivered back to the plants. This means that it is essential for the air to be reheated before being sent back to the room with the plants.

Controlling the above factors can be quite easy when done individually but can be quite a challenge when executed simultaneously, as is with the case with VFs.

The other major challenge that farmers who own VFs face is air circulation, in that they have to come up with ways in which they will deliver conditioned air throughout the entire structure.

When the VF racks are placed close to each other, air circulation can be a real challenge. When in a horizontal position, plants usually limit the flow of air from one point to another, which is something that results in there being differences in factors such as temperature and humidity, on both ends of the planting racks. With a short vertical height, the obstruction of airflow is usually magnified. In addition to that, the air that is usually moving right across the shelf picks up heat and moisture. 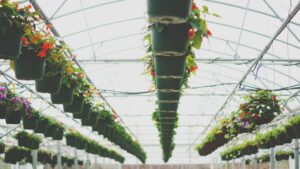 Several strategies are usually applied to facilitate the movement of air in the vertical farm. Most farmers usually opt to use small fans that are installed in incremental position on the racking system, and above the crops, in a bid to boost the flow of air throughout the rack.

Air circulation is also usually enhanced by considering how the conditioned air is usually introduced into space above the crops, and the point at which it is removed right upon being loaded with the heat and moisture. Strategically planning this can have such a great impact on the state of air in the vertical farm.

The type of air diffusers used can play a significant role in the distribution and pushing of air into the desired locations, as well as the prevention of the stack effect.

Can you profit from agriculture without owing a farm- Is it really possible in 2020 and beyond?

The cooling and the dehumidification gadgets are usually placed outside the building where possible so that the excess heat and moisture can be ejected into the outdoors air.

There are times when these equipment are placed on the roof of the vertical farm, or even on the ground outside the farm being served. This helps with the minimization of ductwork. 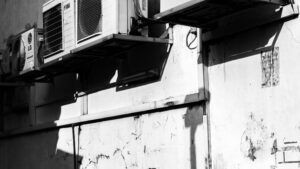 With the other equipment, such as chillers, the farmers have to designate an area that is far away from the vertical farm, in a bid to accommodate larger equipment. Inside the building that has  vertical farm, the best state of air movement can be achieved if there is the proper placement of:

Achieving this is definitely not a walk in the park, and a lot of thinking and strategizing has to go into making it possible. Not forgetting that this may lead to very high initial setup costs.

It is safe to say that no matter the crops that are being grown in a vertical farm, it is quite essential for all the necessary conditions and factors to be considered. This is the only way that profitability in vertical farms can be guaranteed. Farmers can see to it that the vertical farms rise to their fullest potential by addressing the above climate management aspects earlier on in the planning stage.

Thank you for making it to the end of my article about what the challenges of vertical farming are. I hope it was helpful and that you will share it with a friend who would need the same information.  Also, have a look at my recommended read above, hopefully, it inspires you to prepare for the oncoming food situation in this decade.