What is edible insect farming? Why is it getting popular as time goes by? Who needs insects anyway? Such are the questions that I was asking myself recently, and I decided to do some research with regards to this topic. Truth is, we are entering an era of food insecurity like no other, and different measures are being taken to ensure that we do not starve to death when push turns to shove. 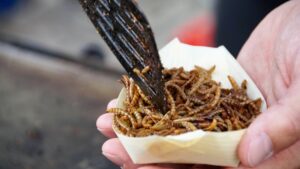 The current food situation in the world – What you should know about it!(how to survive and profit)

For starters, I know that thinking about a plate of insects is most definitely something that is bound to gross you out. unfortunately, we are living in times that gradually dictate our fate. Going through the pandemic period has taught us a thing or two about the very unexpected happening. I am not saying that you start trapping insects to sample their taste gradually, but you might want to accept the idea that insect food will at some point in the future be selling like hotcakes.

In this article, you will learn what insect farming is all about, along with its benefits and drawbacks. Let us get into it without further ado:

What is insect farming?

Insect farming refers to all the processes that go into the raising and breeding of insects. In this case, the insects are perceived as livestock with six feet. They are, however, reared in significantly higher numbers than cows, goats, and sheep. The insects in insect farms are referred to as mini livestock or microstock.

In most parts of the world, eating insects is not a common thing, and is actually not an idea that most people would be very comfortable with. There are however some byproducts of insect farming that people can eat, and this makes the whole concept of insect farming quite broad.

(My apologies beforehand, but you should know that is highly likely that you’ve already consumed insects or insect products. Buckle up! )

These are reddish insects that are reared for the red dye that is used for different purposes. It has so far found its use in cosmetics, paint, and fabric making.

The dye is also used in various foods. Do you have any reddish foods in your house? Check the label if you can see any of the following names:

If you see anything like that on your favorite candy, yogurt, or juice, sorry to break it to you but you are way ahead of time- and you already acquainted with the consumption of insects.

Cochineal beetles love the prickly pear cacti, so the two are bred and farmed together. On average, it takes close to 100,000 of the cochineal beetles to produce 1 kg of the red dye.

I know you weren’t quite ready for this one, but we have to get it out of the way anyway! Every time you see a roach, your mind thinks about the nearest object that can be used to kill it. That is how society has programmed us. In fact, you are highly likely to not live in a house if you discovered that it had a colony of roaches. 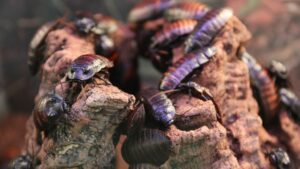 Breed cockroaches for sale is definitely an absurd idea, and one I’m sure you may not be very open to hearing out the reasons as to why it is a viable money maker.

In China, cockroaches are farmed by so many people, and they’ve actually gotten used to consuming these insects. The good thing is that roaches are superb breeders and are very hard to kill, so they are a foolproof venture. All you need is a large market base comprising of hungry cockroach eaters. Well, good luck with that, but if you can get them hooked on cockroach meal, then you could be making a huge amount of money protecting the same roaches that others kill.

P:S: In case you are wondering, roaches have the texture and taste that borders that of a greasy piece of chicken. Not that bad, ay?

This is one very promising microstock, as far as edible insect farming is concerned. You may have already come across videos or articles talking about cricket farming and cricket products.

This is the one insect that most human beings, including those in the West, are quite open to having a taste of. 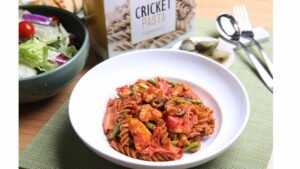 Why this insect? You may ask. Scientists have established that crickets have a very impressive nutritional profile. This makes it very viable for human consumption.

Crickets can be prepared using a variety of approaches, including:

The cricket flour is very nutritious and can be used in several dishes.

If you are thinking of a meal that you and your pets can comfortably share, then you have a perfect solution –crickets! These insects are also fed to birds, other mammals, reptiles, as well as fish.

As you can see, crickets are definitely a viable solution as far as tackling global food insecurity is concerned.

These insects resemble each other a lot, but they are reared using different approaches. They are a favorite to people in various industries since they can be used as:

They are also used to break down plastic products and for animal testing.

The benefits of insect farming

Insect farming has been hailed for a couple of reasons, including the ones below:

It is easy to tell that edible insect farming will be part of the global strategy to feed the fast-growing population. Does this mean that we should start investing in insect farming? Are there any other ways to make money in this industry that we should not overlook? What do the experts have to say about the achievement of profitability in this industry? Here is a recommended resource that you should definitely have a look at if you are planning on becoming an investor in agriculture, or a farmer:

The 4 part Agriculture Series That Will Prep You For This Decade | Investing In Agriculture Like A Pro!

That will be all for this article on what edible insect farming is about. I hope you had a thing or two to learn. Now go ahead and share it with a friend who needs to know what we could be up against in the future – eating insects instead of killing them. 😉