What is World Atlantic Airlines? Which services does it offer? Does it have the type of air transportation features that you could be looking for? Join me in today’s review, in which I will take you through some of the main highlights of World Atlantic Airlines, to help you decide whether you’ll turn to it for the services that it offers, or you’ll turn to other alternatives. Read on to find out:

Wide variety of aircraft: No

See my #1 recommended private jet company on this page

What is World Atlantic Airlines? 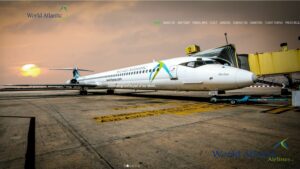 World Atlantic Airlines was originally established as Caribbean Sun Airlines back in September 2002. The company was at this time headquartered in Fort Lauderdale, Florida. In January 2003, it commenced its flights using Bombardier Dash 8-100 aircraft. Its main objective was to see to it the presence of its partner company, Caribbean Star Airlines increased across the world.

4 years later, Caribbean Sun Airlines announced that it would cease its operations (end of January 2007). Upon halting its operations, the company attempted to restart its operations, this time round under the name Merengue Airlines Dominicana. Unfortunately, the management team’s strategies and plans did not bear any fruits.

Later on, the company was sold to Mr. Tomas Romero. Mr. Romero, relying on his wealth of experience in the air transportation industry, embarked on a mission to rebrand the company, and bring up new strategies that would help it rise to the occasion. He named the company “World Atlantic Airlines” and started using the McDonnell Douglas MD-83 to fulfill its operations.

Several months of work went into resuscitating this company, and it eventually got an Airline Operating Certificate in August 2010. In September 2010, World Atlantic Airlines received 14 CFR Part 121 Supplemental Carrier Certification.

This newly founded company exists and thrives on the simple philosophy of delivering the best service to the customers while they’re with them. This is just a claim by the company, so we shall dig deeper to see if it’s keeping its end of the deal.

Do they have a wide variety of aircraft?

By the current industrial standards, I believe this company’s fleet is quite small. With 7 aircraft as of May 2021, World Atlantic Airlines lies way below other firms in this industry that have access to several thousands of aircraft. That said, World Atlantic’s aircraft have very large capacities, which would, to some extent make up for the limited variety of aircraft.

This company’s fleet mainly comprises McDonnell Douglas Aircraft (the MD-80 Series aircraft, widely recognized for being reliable). The MD-80 aircraft in this series are:

Note that besides operating as an airline company with scheduled flights, World Atlantic Airlines also allows its customers to charter flights by booking the entire aircraft.

Do they have a wide variety of pricing options for different budgets?

No. Like a significant number of companies in this industry, WAA is mainly interested in delivering scheduled flight services. In most cases, such flights have standardized price rates, which can then get higher or lower depending on extra requirements. If you decide to charter any of their aircraft, however, you’ll not pay for the individual seats, but for the entire aircraft (everything that goes into ensuring that the aircraft takes you to your destination safely).

In both cases, World Atlantic Airlines requires that you request a quote for your trip, for them to determine what they’ll charge you. The price quote you receive may or not be suitable for your budget, hence you’ll have to decide whether to switch to a more affordable option.

No. Flight sharing services mostly apply to those customers who intend to charter an entire aircraft. World Atlantic Airlines makes it clear that the price quote that it sends such customers does not reflect the cost of an individual seat, but for the entire aircraft. In this case, this company may only follow up with you to know the number of passengers that you intend to travel with (family members, sports team, officials, music band, etc.), and the inflight services they’ll need, to give you the best price quote offer. Unlike flight-sharing services with which you can resell individual seats to other passengers to offset the expenses of the flight, World Atlantic Airlines requires you as the customer booking the charter flight to meet the costs of the charter.

No. This company isn’t amongst the companies that are yet to start accepting Bitcoin payments yet. Whereas a significant number of other companies in different industries have been very slow to consider Bitcoin payments, the air transportation industry has shown particular interest in the adoption of Bitcoin as a mode of payment. Generally, they’ve turned to Bitcoin due to the unique benefits that it offers in comparison to other modes of payment. When you pay for your trip using Bitcoin, you’ll enjoy lower transaction fees, can complete all transactions very fast, and beyond that, you can maintain anonymity. Before paying for your trip using your credit card, try using Bitcoin or other crypto alternatives to see how much you’ll be saving in form of transaction charges.

P.S. See a full list of private jet companies that do accept bitcoin payments on this page

No. World Atlantic Airlines is yet to come up with a defined membership plan. We’ve already seen from time and time again that membership programs help customers take advantage of custom flight packages in which they can lock in the hourly rates of their flights for 25 to 50 hours per year. Such packages are, however, only valuable to customers who travel frequently. If you don’t intend to travel for close to significantly less than 25 hours annually, then this feature should not worry you as much.

The quality of the support?

If you’re trying to contact the support staff at World Atlantic Airlines, then you can rely on the below-listed communication options:

This company does not have very active social media platforms, so I’d not expect very fast responses through them. If anything, calling usually the best option when it comes to booking flights because you can ask all questions right away.

In what countries are their service available?

There’s no information about this company’s favorite destinations on its official website, but since it offers private charter services, I’d imagine that you can reach out to them to arrange for a flight to the most accessible airports in the world. This may, of course, be subject to the range of the aircraft.

A quick look at customer reviews can help you gauge the nature of services that you can expect from a service provider. Genuine feedback enables you to set the right expectations so that you do not make the effort to book a flight only to get shocked by the poor level of service. Let’s see how customers are responding to World Atlantic Airlines’ services by checking out its Facebook reviews:

The Facebook reviews, unfortunately, paint the picture of a company that’s totally unreliable. Whereas the feedback given by one customer isn’t representative of what other customers have experienced, that one customer can be you ( and you’d love to be the only one who’s complaining in a crowd of people who’re okay with the services delivered). One of the customers who has given his feedback claims that the services delivered were the worst he had experienced in a span of 23 years. I don’t know what they did to this specific customer, but there’s, unfortunately, no evidence of a happy customer on other consumer trust sites.

In summary, here are World Atlantic Airlines strengths and weaknesses that I perceived as being the most outstanding:

Do You Own or Represent World Atlantic Airlines?

If you are a representative, or associate of  World Atlantic Airlines and have found something that isn’t accurate in today’s review please, feel free to reach out to me and I will update the information on this post. You can do this by leaving your feedback in the comments section below or simply by sending me an e-mail to contact@goldretired.com.

World Atlantic Airlines doesn’t cut it for a company that we can term as excellent and reliable. I’d like to highlight their strengths and dwell on them to save face, but I’d rather be honest with you so that you can make the best decision, as far as booking your next flight is concerned. If anything, you can compare it to the recommended alternative below to see the clear-cut differences.

Learn about my #1 recommended private jet company on this page!

That’s all for this review on what World Atlantic Airlines is about, and what it has to offer to its customers. I hope that with the insights I managed to share about its different features and services, that you get to make an informed decision. Also, check out the recommended alternative if you’re still in need of an air charter service provider.